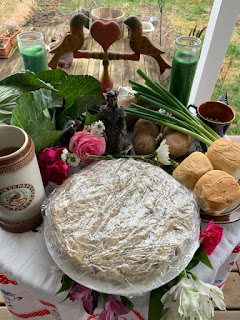 So the plants grow on the land.

Aspects of the goddess Frouwa (cognate of Freya) are believed to have been retained (accidentally) in the lore of the Church in the form of St. Gertrude of Nivelles and “Fraa Trudi,” who shares some similar attributes of Frouwa.

Ironically, it was Protestant and Plain sectarian churches that kept the lore most active upon arrival here in Pennsylvania. Today opens the planting season for hardy items, such as potatoes, cabbage, and spring onions.

Urglaawe observes this day in the context of Frouwa rather than St. Gertrude. In either case, though, this is a distinctly Deitsch/Pennsylvania Dutch observance in form and function.

Frouwasege is also an observance of the sacredness of cats. Give your cats treats (tradition is something white in color, but any will do) and to leave some for Frouwa’s cats and strays. Indeed, the barn cat plays a significant role in the success of the farm by controlling the population of the vermin that can destroy or consume the crops.

We also have rituals associated with specific land spirits today. The ritual program is available here on www.urglaawe.net.

If you plant today, be sure to honor the soil before using the shovel. Next year, we will put this rite into the program in a more pronounced way.

___________
* In the original poem by Amanda Baer Stoudt, the spelling of some words was different. For the Urglaawe context, we have replaced references to Trudisdaag and St. Gertrude with references to Frouwa.

Robert L. Schreiwer is the Manager of Huginn's Heathen Hof and also Manager of Heathens Against Hate. He is the founder of the Urglaawe tradition of Heathenry and is a Ziewer (godsman) in Distelfink Sippschaft. He has been active in the Deitsch (Pennsylvania German or Pennsylvania Dutch) language and cultural movement for over 30 years and has taught the Deitsch language at Kutztown University. He is a trained Braucher in the Oley Freindschaft Guild of Braucherei and the founder of the Guild of Urglaawe Pracitioners of Braucherei and Hexerei. Rob is also a former Steer (2016-2019) of The Troth, and still hold the titles of Steer Emeritus, Ambassador-at-Large, Pennsylvania Steward, and Red Hammer Program Coordinator within that organization. He founded In-Reach Heathen Prison Services, which is now a program within The Troth, and its counterpart for mental health facility visitation remains part of Distelfink Sippschaft.
By Robert L. Schreiwer