As we are in the middle of the spring holidays and are getting ready for summer, it seemed a great time to finally sit down and write a simple ritual for Freyr. Freyr is often honored at many holidays, such as Frexfaxi, Winternights, and Yule, but for me, His presence is most obvious in the Spring. In fact, several of my friends compare His energy to the “inexorable coming of Spring”: the Springtime energy that cannot be stopped. Just as Winter must come, so must it yield in turn to Spring. 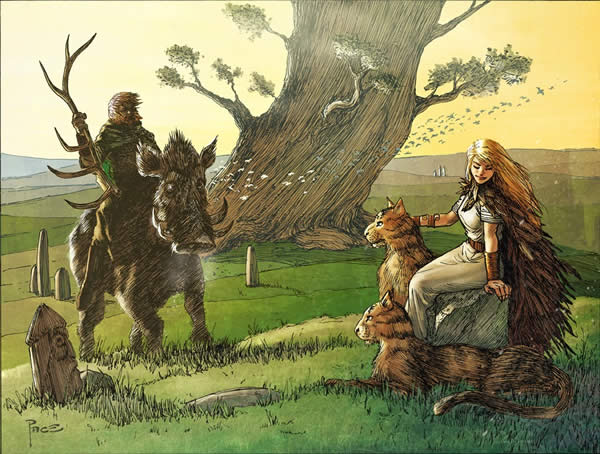 Freyr is a beloved deity of the Vanir. His name means “Lord” (as his twin sister Freya’s means “Lady”), and he is associated with all the good things in life: the prosperity of the land and of the people; kingship and sacrifice; love and sex and peacefulness and frith. Freyr is the life-giving sunshine and rain that blesses the fields with fertility and abundance. A lover rather than a fighter, when He fell in love with a jotun maiden, Gerd, He gave away his sword in order to win Her hand in marriage.

Freyr is also Lord of Alfheim, having been given the rulership over the Land of the Light Elves when he was very young. He is also the progenitor of the kings of Sweden, and his biggest temple was at Gamla Uppsala, near Stockholm, in Sweden. A god of plenty, peace, fertility, and good weather, he was held in high esteem in ancient times, honored on the same level as Odin and Thor.

In my opinion, He’s a great foil to the fire, passion, and fiercely independent nature of my other patron, Freya. His earthiness grounds Her out a bit and helps to keep her tied to the land and the community.A couple of good resources to learn more about Him are Ann Groa Sheffield’s Frey: God of the World and The Troth’s Our Troth: Vol. 1, which has some great material on Him and the rest of the Gods. 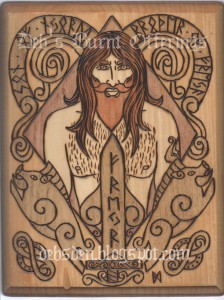 A blót (rhymes with “goat”) is one of the two main types of tradition ritual that modern Heathens use. To blót means to sacrifice or to make an offering, in honor of the Gods, ancestors, or landwights. Back in the day, this usually meant offering up livestock, which the household or community would then use for a feast. As most people nowadays generally don’t have any livestock (or any desire to sacrifice animals) we use alcohol instead. Mead is best, if you can get it; but beer, cider, whiskey, or homemade liqueurs work. Non-alcoholic beverages work just as well as long as they are offered with intent.

When I am leading a blót, almost all of it comes directly from the heart and off script, if I can manage it. It’s not fancy, but it can be very powerful, and usually all is good. For when you can’t lead a ritual off the cuff, here is the format I used for a simple public Freyrsblót. It’s pretty basic and can also be adapted to use with any Heathen deity. You can add in more info or pare down the flowery bits as needed.

And here’s my more fleshed-out version of a public blot for Freyr:

I like to set space prior to people showing up at the event rather than during the event. If I am leading the blót outdoors, I do a landtaking, which tends to be a quiet, thorough perambulation around the edges of the space we’ll be using, talking with the local landwights and offering them a libation of some kind as I go. Other people use Edred Thorsson’s Hammer Rite, or Hrafnar Kindred’s tradition of Calling the Dwarves. (There is no “One Right Way” to do this; your mileage may vary.)

If possible, I welcome each person individually, either as they enter the space or while waiting for everyone to arrive and get seated. I also issue a general welcome once it is time to get started.

Explain the Purpose of the Event and What will Happen:

“Today, we are gathered here to honor Freyr, Lord of Alfheim, and one of the Gods of the Vanir. A blót is an ancient Heathen ritual, common to the pre-Christian Scandinavian, Germanic, and Anglo-Saxon cultures. To start the blót, I will tell you about Freyr and His myths. Then, I will raise a horn to toast Him, thank him for His gifts, and ask for any blessings I wish to receive from him. The horn will then be passed around the circle, and you will also have a chance to toast to Him, offer something to Him, or ask for a relevant blessing from Him. If you do not wish to say anything, you can instead say “Hail!” and take a sip from the horn (or hold it briefly to your forehead) and pass it on. (If the blot is composed of experienced Heathens, I cut this part down to “Today we will be honoring Freyr” and leave it at that.)

Talk about Freyr (can be cut or expanded as needed): 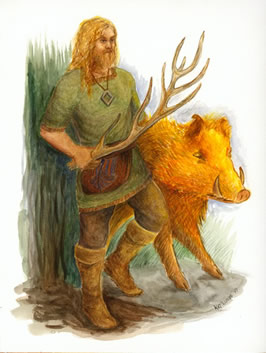 Freyr and the boar Gullinbursti / Kat Lunoe
(used with permission)

“Freyr is a member of the Vanir tribe of deities, as opposed the Aesir of which Odin and Thor are members. He, his sister Freya, and their father Njord are the primary Vanic deities that we know about. (Depending on an individual’s practice, they may include Nerthus as another of the main Vanir deities.) These Vanic deities as a whole are concerned with fruitfulness, abundance, wisdom, fertility, sex, magic, and the dead. Like his father Njord, Freyr is called a “wise Van”. When he moved to Asgard following the Aesir-Vanir war, both he and his father became priests to those gods living there.

“One of his most important myths, the Skirnismal, describes how he won the jotun maiden Gerd for his wife. As it happened, one day Freyr was sitting in Odin’s High Seat, from which Odin can see everything that happens in all of the Nine Worlds. He spied a beautiful Jotun maid with shining white arms in the courtyard of her father’s hall in Jotunheim. He instantly fell madly in love with her; but as she was of the Jotun clan, he knew that no one would support his marriage to her. He fell into a deep depression; the sun stopped shining and the rain ceased to fall.  Eventually, his servant, Skirnir, found out about his predicament and offered to woo her for Him. In order to get to her hall in Jotunheim, Freyr had to give Skirnir his horse that could run through fire and his prized sword that never missed. Thus, he will have no sword with which to fight at Ragnarok. After multiple attempts at persuasion, Skirnir finally convinced Gerd to leave home and marry the despondent Vanic Lord. Gerd and Freyr were married; the sun shined the rain fell and the crops began to grow again, and everyone was happy.

“Due to this myth, Freyr is often seen as the thaw that triggers the coming of spring. Gerd, as a Jotun maiden, locked away at her father’s hall in frozen Jotunheim, is often see as the cold earth in the heart of winter, who is thawed and made fertile by the sun and rain of Freyr.” 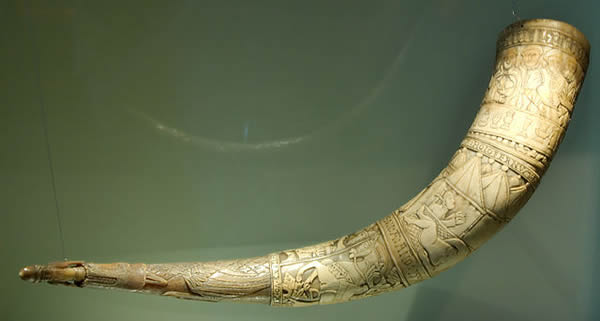 Then, fill the horn with mead or beer. (Freyr is also associated with barley and grains, so a barley beer would be particularly appropriate.) “Freyr, sacred king, Lord of Alfheim, you are wise and generous. Thank you for your gifts. Please bless us with prosperity, fertility, abundance, and all the good things in life. Hail, Freyr!” (Adapt the blessing to local circumstances as needed.)

Pass the horn to the next person in the circle, reminding people to sip with the tip of the horn pointing downward. Also, if people do not wish to drink or say anything, they can pass or bring the horn up to their forehead with reverence. (Note: I also like asking someone to “valkyrie” for the blót–to have them hand the horn to each person, who will in turn hand it back to her when they are finished. If there is a young-ish girl in attendance, or a Frigga- or Freyaswoman, I usually give this job to her.)

Hail Him one last time:

After the last person has toasted Freyr, hail Him again once more, and pour the rest out onto the ground (or a hof, howe, cairn, tree, or body of water) for the landwights. Thank people for attending, chat with people afterwards, and ask for help in clean-up if needed.

Despite the countless pages of modern Heathen rituals I have seen and participated in over the years, I actually prefer these kind of simple rituals. My experience is that the Gods appreciate them as well; no long script necessary.