As a new Heathen, people are often told to “read the Sagas and the Eddas”. However, this can be a bit overwhelming to those unfamiliar with Old Norse spelling and pronunciation. This situation is further worsened by the somewhat stilted, archaic-sounding translations of the key texts. So what’s a newbie Heathen to do?

On the one hand, you do kinda need to read the Sagas and Eddas–and by that I mean read academic translations of the primary texts, not some modern person’s creative retelling of the myths that may leave out key details. However, I realize that it can be a bit overwhelming at first. To that end, I’ve decided to start a series on the various pieces of the Lore—an informal “cliff notes for Heathens”, if you will—that will hopefully give Heathens both new and old an idea of where to start when looking for information relevant to their interests.

For example: Are you interested in learning more about Freyr? Read the Skirnismal. Do you want to hear the dish on all of the Gods? Read the Lokasenna. Do you want to know all of the gory details of Ragnarok? Read the Voluspa. All of which, by the way, are located in today’s topic, the Poetic Edda. 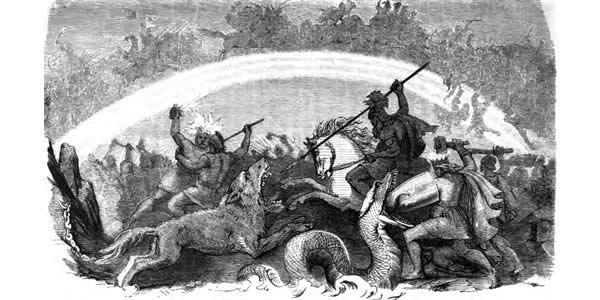 The Poetic Edda, also known as the “Elder Edda”, is one of the

primary texts that modern Heathens rely on when reconstructing the beliefs and practices of the Viking Age. Along with the Prose Edda, which was written/compiled by Snorri Sturlson, it comprises “the Eddas” that everyone tells you to read.

The Poetic Edda is a collection of 39 poems composed by a variety of anonymous Icelandic authors. The Poetic Edda contains much of the material we have on the Gods and the myths, in addition to providing much of the material for Wagner’s Ring Cycle (aka the ongoing saga of Sigurd Völsung’s family). These poems were found in a document called the Codex Regius (“The Royal Book”, or Konungsbók in Icelandic) that was discovered in Iceland in the 1600s. These poems were believed to have been composed between 800-1100 CE, but given that the pre-Christian cultures in the north did not have a tradition of written documents, they were likely not written down until post-conversion (probably between 1050-1150 CE).

(A hint on pronunciation—with the exception of a few special characters, most Old Norse words are pronounced the way they are spelled in modern English.) For more specific details, check out sacred-texts.com’s handy pronunciation guide: http://www.sacred-texts.com/neu/poe/poe38.htm).

Here are a few of the most famous poems from the Poetic Edda:

Völuspá (“vo-LU-spa”) “The Prophecy of the Seeress”; early 10th century. Odin, in his ever-present quest for knowledge, asks a seeress (known as a völva) to tell him about the beginning and ending of the world, which she does. From this poem we get much of our knowledge of how the world came into being and how the various races (Aesir, giants, elves, etc.) were created. This poem also contains the story of Ragnarok (how the world ends) and the stories of the burning of Gullveig; the Aesir-Vanir war; and the death of Balder. Outside of Heathen communities, this poem is probably the most famous poem in Poetic Edda.

Hávamál (“HAH-vah-mal”) “The Sayings of Har”, or “The Sayings of the High One”; various authors and dates. This is probably the most well-known poem in Heathen circles. This is where the “Cattle die, kinsmen die/One day you yourself shall die” quote comes from. Interestingly, unlike several other poems in the Poetic Edda, the Codex Regius is the only source we have for the this poem.
The Havamal can be divided into roughly five sections, as seen below. (Most Heathens usually list the various sections by the stanza numbers rather than terms).

Grímnismál (“GRIM-niz-mal”) “The Lay of Grimnir”; ie, “Odin disguised as a beggar”; date unknown. In this poem’s introduction, Odin and Frigga vie against each other through their chosen foster-sons (heroes), with Frigga coming out as the ultimate victor. Frigga’s foster-son was meant to be king, but Odin convinces his foster-son, Geirröth, to take the kingship by trickery, which he does. Frigga bides her time, but uses some of her own trickery, leading Odin to think that his foster-son has become a miser who wantonly breaks the laws of hospitality. Then, she convinces Geirröth that a crazy beggar man will soon come calling, and that he should treat this stranger harshly. The poem section starts after this basic plot line has been laid down, with Odin standing tied between two huge fires being tortured. The son of Odin’s hero, following the laws of hospitality, gives Odin a drink, and in return Odin relays a great deal of information: the names and locations of the halls of the gods, details about his wolves and ravens, and general information abotu the nature of Yggdrasil itself. “For a single drink | shalt thou never receive | A greater gift as reward,” he says. (The Vafthruthnismol and Alvissmol poems follow a similar format–there is little in the way of a plot line, but a lot of information about the lore is conveyed in a short time.)

Skírnismál (“SKIR-niz-mal”)“Skirnir’s Journey”; date unknown. This myth describes how Freyr won the jotun maiden Gerd for his wife. Sitting on Odin’s High Seat, Freyr sees Gerd and falls “violently” in love with her. He mopes because he knows he can never wed her. Eventually his friend, Skirnir, offers to go win her for him, but only if Freyr gives him The Sword That Fights on Its Own and The Horse That Can Run Through Fire. Freyr does this, and after many threats and promises, Skirnir convinces Gerd to leave her father’s hall in Jotunheim and wed Freyr. (This is why Freyr does not have the proper sword to fight Surt with come Ragnarok.) In addition to being a fascinating story, we learn quite a bit about what Vanic curse magic looks like through the threats that Skirnir uses against Gerd.

Lokasenna (“Loe-kah-SEN-na”) “The Flyting of Loki”; date unknown. In this poem, Loki gate-crashes a party of the Gods (minus Thor) that is hosted by Aegir. He starts a battle of insults (“a flyting”; kind of like a modern-day roast) with all of the Gods, bringing up a slew of past indiscretions. Eventually Thor shows up and threatens Loki with his hammer, and Loki leaves. While alternately shocking and hilarious, the Lokasenna is also filled with many tidbits of information that do not exist anywhere else in the surviving lore, leaving us to wonder what other myths and stories did not survive to the modern age. (This is where we learn, for example, that Frigga slept with Odin’s two brothers, and that Njord married his sister.)

Njörðr:
It is no great wonder,
if silk-clad dames
get themselves husbands, lovers;
but ’tis a wonder that a wretched man,
that has borne children,
should herein enter.

Loki:
“Cease now, Njörðr!
in bounds contain thyself;
I will no longer keep it secret:
it was with thy sister
thou hadst such a son
hardly worse than thyself.”

Thrymskviða (“thrim-SKVEE-dah”) “The Lay of Thrym”, aka “That one time Thor dressed up as a woman”; date unknown. This poem describes the time that Thor woke up to find his hammer stolen, and he could only get it back by give the jotun Thrym Freya as his bride. Freya, of course, firmly declines the chance to be a jotun’s wife, and Heimdal suggests that Thor dress up and go as Freya instead. Loki agrees, and goes with Thor as his handmaiden. Hilarity inevitably ensues. Eventually Thor gets his hammer back and has his revenge on Thrym and his family.

A note on translations: There are only a few translations of the Poetic Edda available. Lee Hollander’s is quite possibly the most-used version in modern Heathenry, followed closely by Caroline Larrington’s translation. Hollander attempts to convey the alliteration of the original poems, but his language is a bit archaic at times. Larrington gives a more literal word-for-word translation and it can make for an easier read, though her translation misses most of the poetic genius of these unknown skaldic poets. However, available in full online in full at the Sacred-Texts website is Henry Adams Bellows’ 1936 translation, which conveys the “feel” of the poetry pretty well and is also easier to read than Hollander’s translation. (And it’s free!)

Hopefully this will help newcomers a better idea of  where to start. If there are any particular pieces of lore you’d like to see addressed next, please mention them in the comment section below!